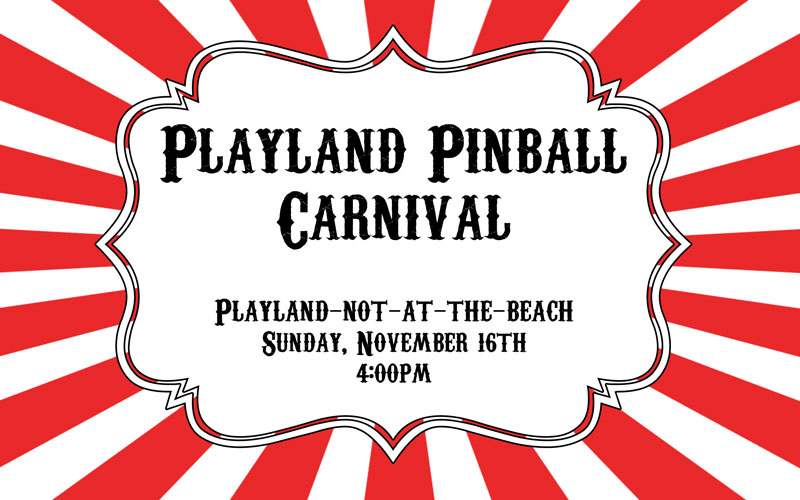 Guaranteed fun for the whole family! Only $20 to enter, and that's not even the best part. Buy your ticket early and we'll throw in all day admission to Playland. Catch the magic show at 1 and 3. Take a trip through the Hall of Memories, get in the holiday spirit at Santa's Village, and travel back in time to the World of Charles Dickens!

Fasten your seatbelt for a wild ride through forty years of pinball with Roller Coaster, Flight 2000, and Rollercoaster Tycoon!

If you dare, face the spooky clowns of Gigi, shiver through all three levels of our terrifying Haunted House, and give yourself goosebumps when you see what happens after midnight in our Funhouse!

And what carnival would be complete without the flips and spins of acrobats under a Big Top? We've got three rings of fun for you - Flying Circus, Circus, and Circus Voltaire!

Step right up! Step right up! One day only! You do not want to miss this event! Did I mention the sideshow? Only $1 to enter! Unlimited visits, only $1 each time! Better yet, we'll give you one entry for free with your admission! Once you get a taste, you won't be able to stay away.

Sunday, November 16th, 2014. Tournament starts at 4:00pm. Playland is open starting at 10am, players are welcome to arrive as early as they like to practice.

Entry fee is $20, and includes all-day admission to Playland-not-at-the-Beach (normally $15). Admission includes the cost of games — everything is set on free play.

Group play on four banks of three machines with 4-3-2-1 scoring. For round one, players will be drawn into 4 player groups at random. For subsequent rounds, groups will be seeded based on current point totals.

Yes! This will be a full WPPR event, with a half-WPPR side tournament.

These are the intended games for the tournament, but be aware that substitutions are a possibility in the event that there is an issue with one of the tournament machines.

There will be a high score half-WPPR side tournament on one of the machines at Playland. Which one exactly is a surprise, but there's a hint in the carnival barker script up top ;).