A series of Friday evening tournaments at the Pacific Pinball Museum, celebrating the history of pinball and culminating in a grand playoff event where one lucky participant will walk away the new owner of an electro-mechanical pinball machine! 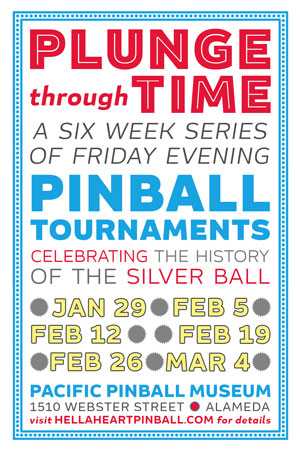 Pinball tournaments starting at 7:30pm on Friday nights. Come to just one, all six, or anything in between!

Series playoffs will be held on Saturday, March 12th starting at 11:30am.

36 Players will advance to playoffs.

There is ample street parking nearby, and a parking lot behind the Museum (off Santa Clara) as well.

The Pinball Museum is easily accessible via public transit. Take BART to the 12th Street exit in downtown Oakland and catch the AC Transit 51A at 12th and Broadway, or take the AC Transit Line O from the Transbay Terminal in San Francisco.

Both buses will drop you off at Webster and Santa Clara, just steps from PPM's front door. We recommend using Google Transit to plan your trip.

The Plunge through Time tournament series is an IFPA sanctioned event, and all players will earn points towards their World Pinball Player Ranking (or become a world ranked player) just by participating.

For WPPR purposes, series results will be submitted as three events:

$10 gets tournament players admission to the Pacific Pinball Museum (normally $15) and entry into the tournament. Once you're in, all machines are on free play!

Of the admission fee, $7 will go to the Pacific Pinball Museum and $3 will go towards the prize pot for series playoffs.

For museum members, admission to the venue is free as always, but the tournaments have a $3 entry fee, all of which will go to the playoffs prize pool.

At our Friday evening tournaments, players will take a journey through pinball history! In groups of four, you will play one game each on six machines, each representing a different era of pinball.

Players will be drawn randomly into groups of four and assigned a set of three machines. The group will play one game on each of the machines. At the end of each game, players will be assigned points based on how their score compares to the other players in their group. The highest score will receive 7 points, second highest 5 points, then 3 points, then 1 point.

Once all the groups have completed their games, players will be drawn into a new group and assigned three new machines.

These are intended to be casual, beginner-friendly events. We love to see new tournament players and encourage interested pinheads of all skill and experience levels to join us and give it a shot. Meeting other pinball fans is fun no matter how well you play! And who knows...you might surprise yourself!

For each Friday night tournament, participating players will be awarded points on a set scale according to their finishing position (100-94-91-90...).

Aggregate scores over the course of the series will be used to award playoff spots.

Rankings are maintained for the benefit of players who want to come to multiple events, but there is no expectation or requirement that series participants do so. Players are welcome and encouraged to attend only one Friday night event if that's what suits them. (Although we of course hope they'll have so much fun that they just have to come back!)

36 players will be invited to Open playoffs on Saturday, March 12th, scheduled to start at 11:30am.

There are two paths to qualifying for playoffs.

The first through fourth place winners at each Friday night tournament will automatically win a space in the playoffs. The remaining spots will go to the players with the highest aggregate score over the course of the series.

Series standings will be posted here after each Friday night tournament.

Series playoffs will be played into two phases.

Phase one will be seven rounds of four-player group match play with 7-5-3-1 scoring. Pairings for the first round will be assigned randomly, and pairings for subsequent rounds will be swiss.

Each round will be played on a machine from a different era, in chronological order:

At the end of the seven rounds, the top 16 players (or, top half in the event we have fewer than 36 participants) will advance to a seeded single-elimination playoff bracket with best-of-three matches to determine the winner.

There will be two restrictions placed on a player's machine choices:

There will be a forty-five minute meal break between playoff phases one and two.

100% of cash collected in entry fees will be paid out to winners at series playoffs.

Back to the Flipper: Fun Side Tournament

Back to the Future high score side tournament info to come...

At our playoffs, we'll be giving away a pinball machine donated by the Pacific Pinball Museum!

The game (to be announced, but it will be a classic EM) will be drawn via raffle. Players earn one raffle ticket for every Friday night tournament they play in (players must play the whole tournament to be entered in the raffle).

Players who advance to series playoffs on Saturday, March 12th will earn one ticket for playing in the tournament, and an additional ticket if they advance to Phase 2.

The Pacific Pinball Museum offers over 100 games, representing all eras of pinball and all set on free play.

Any machine in working order is fair game to be used in the tournaments, and players can expect to play different games at each event.

Machines rotate in and out of the pinball museum frequently, so this list may change before the series starts. However, here is a current list of games at the Pacific Pinball Museum: