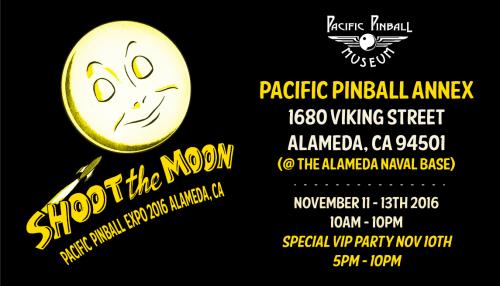 Shoot the Moon Pinball Expo is being held Friday, November 11th through Sunday, November 13th in Alameda, CA. We are hosting tournaments every day of the expo, with each day highlighting a different period in pinball history.

All tournaments are free with admission to the show. Tickets to the Thursday night VIP party are $100. For Friday, Saturday, or Sunday, adult tickets are $45 per day, or $120 for a three day pass. Show tickets can be purchased in advance online.

Three strike knockout tournament highlighting classic EMs from the 1960s and 1970s. Matches will be best-of-three. Will award IFPA points.

Three strike group knockout tournament on solid state machines from the 1970s to today, with 4 player matches and strikes being awarded to the two lowest scoring players in each group. Will award IFPA points.